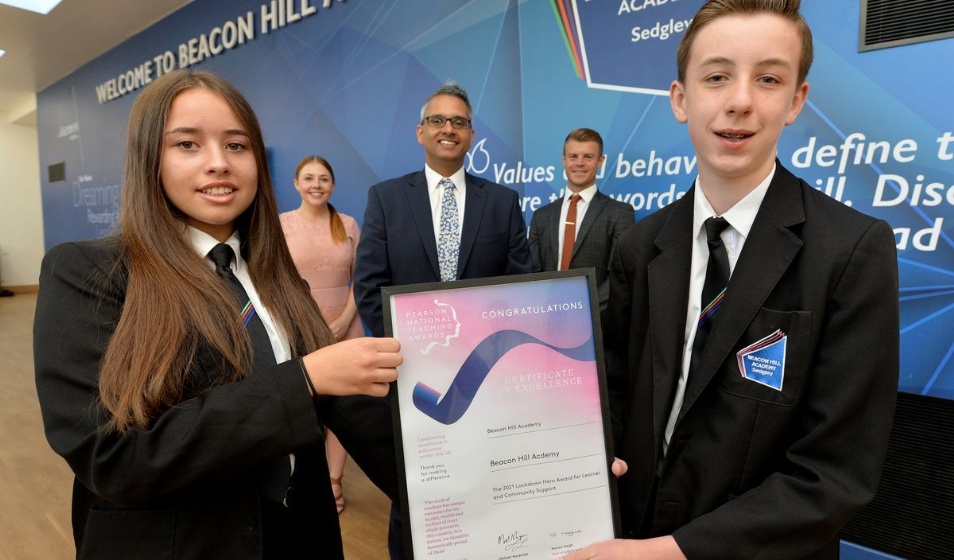 Beacon Hill Academy has been recognised nationally by ‘Pearson National Teaching Awards’ for ‘Excellence in Education’. The award, titled “The 2021 Lockdown Hero Award for Learner & Community Support” is a testament to the academy’s work during all three UK lockdowns, both academically and socially.

During all three lockdowns, the academy was quick to react, swiftly putting into place a high-quality distance learning programme through the academy website and Microsoft Teams. As time moved forwards, the academy moved to more dynamic teaching approaches, creating a blend of pre-recorded teacher voiceover lessons and live face-to-face lessons through Microsoft Teams and other Online Learning Platforms such as Hegarty Maths, CENTURY Tech, GCSE Pod and more. Lessons of all types were well received by learners and parents/carers with parents/carers being kept regularly updated with learner engagement via messages, emails and telephone calls.

Similarly, from a wellbeing point of view, the academy kept in regular contact with families via form tutor phone calls to check on how learners and their families were coping with the lockdown and if there was anything the school could do to support them. Examples of support offered include:

When allowed, the academy also arranged for small groups to take part in socially distanced booster sessions and meetings. These lessons, primarily offered to Year 10 & 11 served to supplement the pre-recorded and Live Lessons in order to prepare them for their GCSEs (or MOCK-CSEs) – although the academy came extremely close with the provision that was put in place, there is no substitute for face to face learning which is what these sessions hoped to address.

The academy also felt that it was important to regularly reward learners for this work. As ‘Rewarding Effort’ is one of the Trust core values and underpins everything at Beacon Hill Academy, a huge variety of rewards were awarded during the lockdown periods, including:

It is for all of these reasons that the teachers and staff at Beacon Hill Academy have been recognised as a national centre of excellence during the lockdowns. This is an award which the academy is extremely pleased to accept and proud of. This award solidifies in the minds of all staff at the academy that the work they did during the pandemic was not only worth it but genuinely had an impact on the education and wellbeing of their school community.