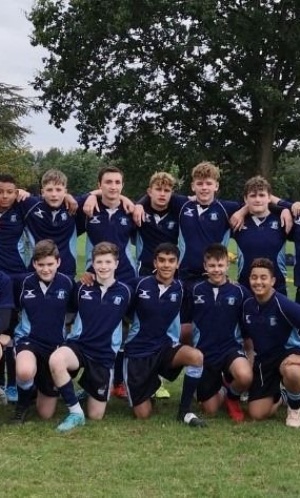 The Beacon Hill Academy year 10 rugby side lost out to Bromsgrove school in the first round of the Daily Mail National cup last week. In a tough draw which saw them drawn away at Bromsgrove, ranked in the top ten schools in the country for rugby, the lads knew they had an uphill battle.

However, they showed great fight and character as they pushed their high flying opposition all the way making the Bromsgrove outfit dig deep and ultimately show their class in the second half as their slick passing moves undid the stout Beacon Hill defence who made tackle after tackle. At one stage in the first half, it looked as though there may be a huge upset on the cards as Beacon Hill reduced the deficit to just one score and were camped on the Bromsgrove try-line for ten minutes. Unfortunately, they could not find that all-important score and were cruelly undone just before half time by two excellent Bromsgrove counter-attacks which ultimately put the game to bed.

It was a brilliant occasion for the side who got to experience some unbelievable facilities and hospitality, which everyone was extremely grateful for.

Beacon Hill will now face Bishop Vesey's school from Sutton Coldfield in the first round of the plate competition - Another tough draw for the lads.